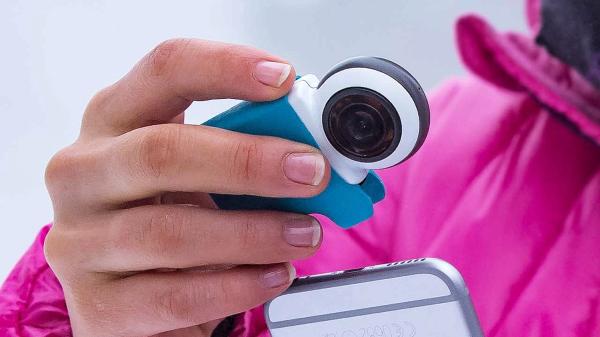 Watch yourself using a tiny projector, step onto a small Ford, play your favourite vinyl tracks on a minimalist turntable, and bring back school memories with a stylus

ACTION HERO
Giroptic iO 360-degree camera
This clip-on camera for smartphones and tablets is perfect for action footage. The iO shoots photos, records video footage and has a live broadcast mode that streams directly to YouTube. The camera uses two 195-degree wide-angle lenses and comes with an app that lets users control the footage while using their phone. The iO is also fully virtual-reality-compatible, so you can watch your movies in total immersion when you are done filming. €249, giroptic.com

HOVER CRAFT
Ford Carr-E
When bosses at Ford’s European headquarters in Cologne challenged employees to come up with a last-kilometre personal-mobility solution, engineer Kilian Vas invented the Carr-E. The hoverboard-style device is designed to sit in a car’s spare wheel bay, and has a range of 22km and a top speed of 18kph. Capable of transporting people or objects weighing up to 120kg, the four-wheeled device is designed to get the user from their parking spot to the final destination, rather than for use as a commuting solution. Other concept vehicles included a folding electric tricycle that transforms into a shopping trolley or golf buggy, and an electric wheelchair capable of loading itself into a vehicle. €TBC, ford.com

SAFE AND SOUND
Soundshield ski headphones helmet
Listening to music on the piste can be an almighty hassle, as you try to operate buttons while wearing gloves or attempt to squeeze earbuds under your headgear. Step forward the Soundshield, a helmet with removeable headphones. When in use, the cups slip into an opening over the ears and the headband sits on the bottom edge of the helmet. Wearers tap the button on the ear cap to play music or take calls. When done, press the quick-release button to free the headphones for casual use. €180, indiegogo.com

BEAM ME UP
Aiptek i70 pico projector
Aiptek claims its tiny i70 raises the quality bar for so-called pico projectors. Capable of beaming pictures more than two metres wide, the i70 weighs 132g and has a brightness of 70 lumens. Resolution is 854×480 pixels while the battery lasts for up to 90 minutes. The projector is compatible with Apple AirPlay and Android Miracast, and can be used with any HDMI-enabled device. When not being used, the i70 doubles up as a power bank for charging other gadgets. €309.95, aiptek.de

COMFORT STATIONERY
Staedtler S Pen
Here’s a blast from the past that will either invoke fond childhood memories or trigger unwelcome flashbacks to homework deadlines and playground tussles. German pencil manufacturer Staedtler has teamed up with Samsung to create the S Pen stylus, based on its classic Noris pencil. The pen has the iconic yellow-and-black striped design and works with the newly launched Galaxy Book and Galaxy Tab S3 tablet. It can be used to make doodles or scribble the sort of notes to pals that landed you in detention. staedtler.com

GO FULL CIRCLE
Wheel by Miniot
Art meets cutting-edge design in this stunning minimalist turntable. The eye-catching Wheel turntable has an internal tonearm and phono cartridge that plays the underside of vinyl records. Listed on Kickstarter, the device is made by Dutch audio firm Miniot and can be mounted horizontally or vertically. Records are kept in place by an inch-long spindle, while the mahogany laminate tonearm has an infrared sensor for tracking grooves accurately. Playback is controlled by pressing the central spindle, and volume is altered by giving it a twist. Having quadrupled its crowdfunding target with time to spare, Miniot will be making first deliveries of the Wheel around November. From €568, miniot.com