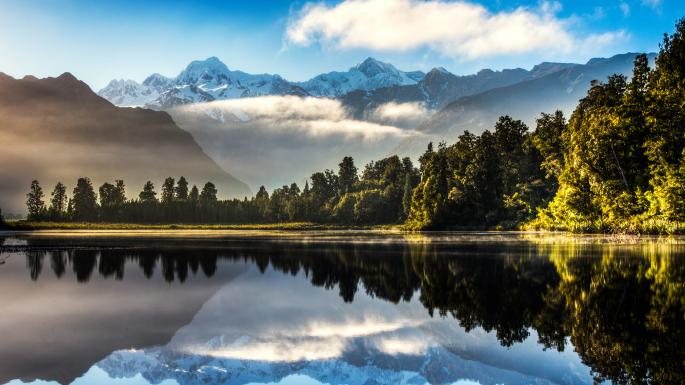 Nowhere crams in more nature than New Zealand. Our writer wades in deep

With apologies to the New Zealand tourist board, the most memorable moment from my first trip to its epic, empty country was standing in a stream so cold, I thought I was going to throw up. This is New Zealand’s strong suit, the real reason to fly most of the way round the world for a holiday: countryside that goes straight to the viscera.

People – such as the tourist board – will try to point you towards other USPs. Auckland has cool brunch stops on Ponsonby Road, and yachts bobbing next to oyster restaurants in the spruced-up Wynyard Quarter. It reminded me of an upmarket Portsmouth. Christchurch, reinventing itself after the 2011 earthquake, now has shipping containers for sale converted into shops but then so does Croydon. Wellington, by some accounts, is the birthplace of the flat white coffee, invented – and this is quite New Zealand – when someone ballsed up a cappuccino in 1989. But New Zealand’s a long way to go for a hot beverage, and I like the ones they do in Caffe Nero.

The pinot noir and chardonnay are up there with the world’s best – but Burgundy’s a lot closer to home. Then there’s The Lord of the Rings and all the touristic tie-ins that entails, but my idea of a holiday isn’t staying in a hut with a hilariously small door and a deliberately low ceiling, ticking off the hillocks that Elijah Wood did his retakes on. I’m all for the hillocks. Just not the hobbits.

All that’s ancillary. The resounding reason to come to New Zealand is geological: rivers, lakes, beaches, islands, mountains, valleys and glaciers. Big views under big skies. The mountains may be higher in the Himalayas, the wilderness wilder in the back countries of America’s national parks, the pubs better in the Yorkshire Dales, but nowhere on earth fits such a thrumming greatest hits of rock and water into such a confined space (New Zealand has a smaller land area than the British Isles), and nowhere makes it easier for tourists to throw themselves right in among it, in highly original ways.

Which is how I came to be standing calf deep in a really cold stream. It flows through something called Siberia Valley, so I can’t complain there weren’t clues that it might be a bit parky.

The sky was dark and vast. I went to bed feeling pointless and insignificant, in a good way

I was on a frankly brilliant tripartite morning excursion called the Siberia Experience, part one of which began at 8am in a gift shop in the village of Makarora, a 45-minute drive from the lakeside resort of Wanaka. At the back of the gift shop was the check-in desk for Southern Alps Air, where the fresh-faced lad taking the tickets also turned out to be the fresh-faced lad who’d be flying our little yellow six-seater plane.

“There’s the fire extinguisher, there’s the axe. Right, let’s go,” announced Pilot Will, 24, as he set our Cessna bumping off across a field and slowly up into a cloudless milky-blue sky. It was magical. With zero turbulence, it felt like an out-of-body experience as we hovered above the flat-bottomed valleys and shimmering lakes of Mount Aspiring National Park, Will namechecking each frosted mountain peak as we slalomed past.

The landing was less serene: a vicious, banking right turn over treetops, a plummet through a band of blinding cloud, then a skidding stop on the high, meadow-matted floor of the Siberia Valley. Will seemed unfazed.

Part two of the morning’s fun, we knew, was to be a 4 – mile tramp, which in the local vernacular is a short hike, rather than a big vagrant. “The path starts there,” Will said. “You’ll need to walk through that stream. I’d take your boots and socks off. It’ll be cold.” With that, he turned the plane round and phut-phutted off.

The stream wasn’t just cold – burningly, cramp-inducingly so – but very knobbly, the rounded rocks underfoot giving the effect of an extreme and unwanted spa treatment. I’m not saying I could have died on the 30ft hobble across, but if I had taken a tumble, I would, at the very least, have been bloody chilly for an hour or so, until the late summer sun crept over the mountains.

We made it, of course, throwing ourselves, gasping and squealing, onto the grassy bank. In fact, once the nausea had subsided and feeling had returned to my toes, I reflected that it was all rather exhilarating, being freed momentarily from hand-holding health and safety strictures. Yes, you might sprain an ankle, but stop mincing about and just get on with it. This is New Zealand, mate: go wild or go home.

Part three of the excursion was more Hollywood than hair shirt. Waiting at the end of the valley path was a jet boat to propel us back to base. While the provenance of the flat white is up for debate, the jet boat – essentially a super-powerful pool pump with seats – is a New Zealand invention.

Our driver, Alec, had little interest in the direct route along the shallow, braided Wilkin River. Instead, he threw in a crowd-pleasing number of party-piece spins and wide spray-splashing turns, but still had us back in time for coffee and sandwiches in Makarora. Soar, splash, zoom: it’s hard to imagine doing more with a morning.

At Mount Cook, another 2 hours on from Wanaka, all you need to do to have a brush with some extreme nature is open the curtains. The Hermitage hotel won’t win any awards for its decor, but I’ve never had a better view from a bedroom window. Beyond the valley floor, between the slopes of neighbouring peaks, rises the perfect Toblerone triangle of New Zealand’s highest mountain, at 12,218ft. Be in the bar with a glass of Speight’s at dusk to see its southern side glow pink.

This is Sir Edmund Hillary country, where the Aucklander trained for the first Everest ascent. Unsurprisingly, there’s much encouragement to get out among it all here, too. If you want to truly get the shivers at the scale and power of what’s going on around you, take the boat tour on the grey-green meltwater lake at the snout of the Tasman Glacier. It’s an impressive puddle. As we bobbed among creaking blue icebergs beneath a dirty great wall of ice, our driver, Emily, an effusive 22-year-old Aussie, reeled off a string of improbable statistics. The glacier is 15 miles long. There’s 800ft more of it below the 100ft section we could see above the waterline. It takes a snowflake falling in the mountains up to 600 years to reach the lake. After the 2011 earthquake, a 30m-ton chunk of ice as high as the Hermitage hotel fell off into the lake.

If this humbling number-crunching sounds up your street, get there in the next 20 years, as poor Emily doesn’t have a job for life: the Tasman Glacier’s melting at the rate of up to 260ft a year.

That evening, I recommend drinking a bit too much wine at dinner, then taking the stargazing tour. The sky’s dark and vast round these parts – it’s an International Dark Sky Reserve – and I went to bed feeling pointless and insignificant, in a good way.

I was in New Zealand for nowhere near long enough. According to the tourist board, for the 221,136 Britons who came here last year, the average stay was four weeks. But I still had time to fit in one more silly flight.

I was used to the no-nonsense New Zealand approach by now, but I wasn’t quite yet prepared for the instruction “Hold onto the back of this”, when “this” was a de Havilland DHC-2 Beaver seaplane.

While Auckland is nobody’s favourite city, it is the gateway to a string of high-class holiday islands in the Hauraki Gulf, Waiheke being the biggest and best known, cloaked in vineyard restaurants and multimillion-dollar second homes. I was booked on a scenic island-hopping flight with Jerry, a pension-age pilot from Alaska. Having successfully bobbed his floating plane out into Auckland Harbour, got us airborne and flown us over a few lush volcanic craters, Jerry splashed us down off a little island called Motuihe, where I was going to do my Robinson Crusoe thing for a bit while he flew some other passengers over some other islands.

Except the wind was up. In order to take off, Jerry needed someone to wade a few yards into the water and steady the back of the plane, to keep it pointing away from the beach and out to sea. For some reason, he thought I might be the man for the job. With no training or clue, I grabbed the De Havilland’s tail fin… and pulled my fingers away just in time, before they were crushed between the wiggling elevator flaps.

I found a different handhold. But when the engine spluttered loudly to life, I panicked and let go, assuming something nearby was about to get very hot. The wind immediately spun the plane towards starboard and ploughed it straight back into the sand.

Some local men, wearing Bermuda shorts and bigger muscles, took pity on me for the second attempt, and Jerry was up, up and away.

He was an hour late picking me up. There are worse places to be stranded than Motuihe, with its curve of beach, woods to explore and red-legged oystercatchers strolling by, and, of course, I was a fully fledged chilled-out New Zealand adventurer by this point. But as the sun drifted towards the horizon, I did start to get a little anxious.

I phoned Jerry’s office. This was a wilderness, but a friendly wilderness, with a phone signal. Good old New Zealand. Jerry had had to refuel, they said, but he was on his way. True enough, soon his eight-seater was wobbling over my now deserted beach. The wind had died down, thank goodness.

Until we get our first moon base sorted, New Zealand is the furthest-away place a Briton can fly to for a holiday. It took me 34 hours to get from downtown Auckland to my front door in south London. But if you have the time, and the means, do it. It may just be the once: so make sure you kick your boots off, roll up your trouser legs and wade in deep.