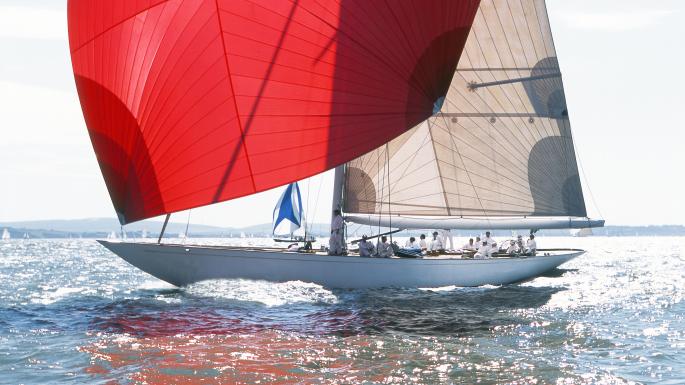 Given the brash headlines and images often associated with superyacht owners, you would be forgiven for thinking that anyone who owns one has more money than taste. However, you would be wrong. For much of the year, many of the world’s wealthiest stay well below the radar as they take to the sea in style, racing, refitting and cruising their classic sailing yachts, with not a gold tap or a fur throw in sight.

For a line-up of the most elegant yachts on the sea, look no further than Les Voiles de Saint-Tropez, which is “by far the most exciting regatta in the Med, if not the world”, according to Tara Getty, the grandson of Jean Paul. Getty has just added a fifth classic yacht to his portfolio, ranging in size from a Riva to the 80-metre Talitha G. His latest acquisition, a 22-metre sailing yacht called Baruna, will accompany his bigger motor classics to his favourite regattas.

“I love the old-fashioned feel of Les Voiles, and the regattas in Cannes and Antibes, with all the added drama of being in a famous port surrounded by beautiful boats, but the smaller ones are just as much fun in different ways,” he explains.

From Sir James Dyson to the Who’s Pete Townshend, Hugh Morrison, the founder of Montfort Communications and his partner, the designer Amanda Wakeley, the Gucci sisters and the Carphone Warehouse co-founder Sir Charles Dunstone, a discerning elite have poured passion into making sure that their time capsules evoke the romance of the past while still offering seven-star comfort. Wakeley takes the helm every May in Morrison’s pride and joy, a 27-metre J Class called Savannah, for the Coupe des Dames regatta in Saint-Tropez, while Morrison plans a season that includes Spetses and the Panerai circuit (of which Getty is also a fan).

While racing is undeniably a draw, there is also the challenge of restoration. Savannah’s saloon, for example, is surrounded by mahogany panelling and a wood-burning stove, giving it the feel of an old-school gentlemen’s club rather than a superyacht. “We love having low-key dinners below deck with a group of friends,” says Wakeley. “When they leave I retreat to the master cabin, which has the most glorious roll-top bath.”

For many classic yacht owners the allure lies in a feeling of recapturing history. Sir Charles’s Shemara, relaunched in 2015 after a rebuild that took a million man-hours — with marble fireplaces and a resplendent staircase — was once banned from the Riviera by Prince Rainier of Monaco thanks to the scandalous behaviour of its owners at the time, Sir Bernard and Lady Docker. Having found her languishing in a dockyard, Sir Charles asked the designer Ilse Crawford to oversee the interior makeover. “In a way,” he explains, “it’s actually easier to restore something beautiful than to try to build something beautiful from scratch.”

There is no typical profile uniting this elite, says Mike Horsley, a classic yacht broker for Edmiston, “but to make your mark in Portofino, Saint-Tropez or St Barths with a modern yacht, the investment needed is several tens of millions. With a classic you can get all the same kudos for a fraction of that, and buy into a very nice circle of like-minded people who want to get away from the flashy ‘nouveau riche’ crowd.”

Even in the world of superyachts, it seems, you can’t go wrong with a classic.