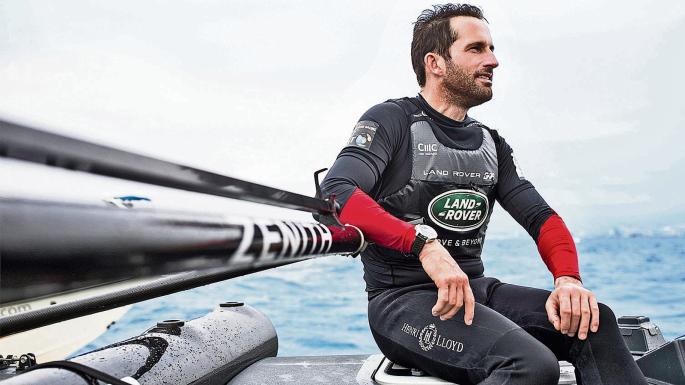 Sir Ben Ainslie is ready to call on his Olympic spirit as he bids to end Britain’s 166-year America’s Cup drought.

A small boy looks out over the sea in Falmouth, watching, awestruck, an America’s Cup racing boat. A man turns to him and says: “That could be you one day.”

“And I said, ‘What are you talking about?’ ” Sir Ben Ainslie recalls. “I was sailing around in my little Optimist dinghy. And my dad’s friend said, ‘No, no I think you have the talent to do it.’ I never forgot that comment.”

It may just be the sporting story of 2017, then, if 30 years later, that boy was to win the America’s Cup for Great Britain, the nation’s first victorious skipper in 166 years.

That delicious prospect of Ainslie turning a childhood dream into vivid, glorious reality brought to mind a comment from one of Britain’s foremost Olympic coaches: “Good athletes let things happen, great athletes make things happen.” There is no doubt about Ainslie’s category.

Through multiple world and Olympic triumphs, Ainslie has proved himself a man who shapes history. A fierce competitive will drove him to four Olympic gold medals and now it has put him at the helm of the most credible, thrilling British challenge for the America’s Cup in more than a century.

From an implausibly ambitious plan in a lawyer’s office four years ago, he has raised £100 million, built a team of 140 people, a base in Portsmouth, another in Bermuda, and five boats, including the spectacular foiling catamaran that will compete for the trophy in May and June.

The yacht Ainslie saw as a 10-year-old in Cornwall was a classic 12-metre monohull, built by Peter de Savary for his failed 1983 attempt on the America’s Cup. Ainslie will be at the wheel of a two-and-a-half-tonne flying machine capable of 60mph as it soars out of the water on hydrofoils.

“The sport has changed immeasurably,” Ainslie says. And necessarily. “The America’s Cup has the history, the glamour, and now it has the boats and the intensity. The purists of sailing don’t particularly like it. They never wanted catamarans. Many of them would like us to go back to sailing around in J-class yachts. They are beautiful boats. But they are not great for TV.

“I’m a traditionalist at heart. I love classic yachts. But to me, as principal of one of these teams, it’s clear that this is the direction we have to go.” 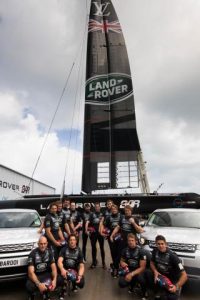 The new race boat will take its first voyage this week

He talks of the need to appeal to a younger crowd who, he hopes, will be gripped by short bursts of frenetic racing and all the risks inherent in these boats that fly through the water. This is sailing for the modern age, pushing design and speed to such limits that even Ainslie, with all his experience, feels very real fear.

“It’s pretty terrifying, to be honest. I won’t lie, when you are going over 40 knots [46mph] it’s pretty scary. You’ve really got to have your s*** together. We feel like test pilots. You are going faster and faster and the boat feels close to breaking point. You are waiting for something to ping off. If it does, it’s going to hurt. There is no forgiveness whatsoever.”

Those dangers are understood by Ainslie more acutely than anyone since the death of Andrew “Bart” Simpson, his great friend who died when his Artemis catamaran capsized during a high-speed training manoeuvre before the America’s Cup in 2013.

Considering the stakes — throw in mounting expectation, vast investment, protecting his own proud record as a winner — it is a relaxed Ainslie who sits down to chat. He turned 40 on Sunday but insists that he passed that milestone in a very good place, and not just because he is on the Atlantic island of Bermuda. “I’m fortunate to be where I am in my life,” he says.

An intriguing mix of self-deprecation, reserved courtesy and fierce competitiveness — his renowned intensity will surely test the America’s Cup ban on broadcast swearing — Ainslie appears to be revelling in a new phase of his life. For decades, it was just him and his boat. “Olympic sport is a bit more selfish. You are only really worried about one person,” he says.

Now he is enjoying broader responsibilities. His family, wife Georgie (née Thompson), a television presenter, and baby daughter, Bellatrix, have decamped with him to Bermuda for seven months.

He is also the head of a much bigger family, Ben Ainslie Racing, with dozens of staff and their families out on the island. Ainslie says that he is embracing the challenge of “leading by example” as he steers this expensive operation.

Of course, his greatest influence will be as skipper, or “the jockey”. While the rest of the six-man crew bulk up on protein shakes for their job as strong-arm grinders, Ainslie is slimming to 80kg (about 12 st 7 lb). “I haven’t been that since I was 18,” he says.

His job is the least physical, though he talks of coming off the water shattered by the sensory overload from racing these high-speed machines.

The new race boat will take its first voyage this week and his Land Rover BAR team will set about fine-tuning. One of the main goals is to reduce the speed at which the boat can lift on to its foils, at present about seven to eight knots. With light winds expected when qualifying begins in May, every little gain in efficiency could be crucial.

“It’s a bit like Formula One,” Ainslie says. “You can have the best sailors in the world but if the boat isn’t working, if the systems aren’t delivering, or you have too many failures, you are just not going to win.”

Ainslie has turned to Britain’s automotive industry, with aerodynamics experts and mechanical engineers borrowed from his backers Land Rover.

“We have certainly taken a different approach to other teams. We have taken a lot of people from Formula One — Martin Whitmarsh [former team principal of McLaren] and Richard Hopkirk, who used to be Lewis Hamilton’s race engineer. My thinking was that given the control systems are now so critical we don’t necessarily have that expertise in the marine industry.

“Effectively the key challenge is that we have four or five grinders creating the power for the systems on the boat. And they are literally right up against it. If your systems aren’t efficient enough you won’t make it around the course. You will keep running out of oil.

“You have two accumulators which you are constantly filling up. And each manoeuvre, depending on how efficient you are, will take one or two of those accumulators away. And then you’re done. You’ve got no energy left and you have to make another manoeuvre in 60 seconds. So that is really the big challenge of this cup.

“It comes down to how efficient your valves are, how stable your boat is. Because if it is really unstable and you are constantly adjusting then you are obviously using more oil pressure. So that, in a basic sense, is the challenge we are up against.”

How size and speed compare

A fascinating combination of brute strength and tactical wit will be required on the turquoise waters of Bermuda’s Great Sound. “It’s a perfect natural course, like a lagoon. It’s going to be the most amazing spectacle,” he says.

Despite Bermuda’s status as a British Overseas Territory, the home crowd is likely to be behind Oracle USA, the holders who brought the race to this island. Great Britain would defend its title in Portsmouth in 2019 if all goes to plan. But Ainslie is hopeful that British public back home will be gripped by his tilt at history. “It’s an event we’ve never won. It’s like the Tour de France. The public really got behind that. If we have a shot at winning, it will be huge.

“It sounds a little bit corny but we started this race around the Isle of Wight, the Americans came and took it back to New York Harbour and we haven’t seen it since. As proud Brits with our maritime heritage, we’ve got to sort that out.

“British sport is doing really well. There’s maybe a changed mentality in the last ten years. Andy Murray on top of the tennis world, the Olympics, cycling is a great example. If we can get this team up there . . . ”

After such a long wait, it is hard to keep hopes in check. “We are realistic,” he adds. “Only one team has won at the first attempt in 166 years.” If he does fall short, he will be back again, though Ainslie does not tend to do defeats.

“It hasn’t all been glory,” he says. “There have been a few bumps down the road. But yes, I’m not very good at not achieving the goals I set out.”

This mission — winning the America’s Cup for Great Britain — was established when he was ten watching those boats off Falmouth. Ainslie has a record of fulfilling his sporting dreams.