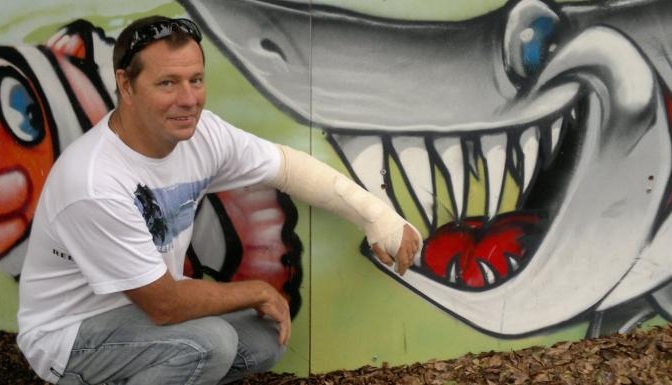 Attacked surfer set up a unique society to help victims overcome fear and their injuries. Even as he lay in a hospital bed after a shark tore off most of his arm, Dave Pearson vowed to go back in the ocean.

“I committed to it on the first night. I said, ‘I love surfing so much. Even with one arm, I will figure out a way,’ ” Mr Pearson, 52, said. His love of the sea began as a child, having been born in Hartlepool on the North Sea coast of England before his family emigrated to Australia when he was six years old.

However, his path back to the waves after a bull shark shredded his arm to the bone on the northern New South Wales coast five years ago was more difficult than he imagined. His endeavour spawned an exclusive circle – the Bite Club.

The group for shark attack survivors and others affected was founded after Mr Pearson realised that sharks left scars not only on the humans they attacked. Many people needed the help that could be provided only by those who had been through a similar experience.

That realisation arrived after one of those who helped to save his life – a brawny fellow surfer – broke down and told him: “Man, I haven’t been able to sleep. I keep reliving the moment.”

Mr Pearson, an engineer in the coal industry, said: “It blew me away that the attack on me had affected him so much. It’s never ‘my attack’, it’s our attack. Everybody who was there that day played a part in my surviving – and they all have different versions of what happened.”

He vividly recalls the moment the shark attacked and his remarkable survival when his surfboard became wedged in the shark’s lower jaw.

“It couldn’t actually get a good grip on my arm but its teeth still sliced through the muscle tissue down to the bone,” Mr Pearson said. “My hand went right into its mouth. My left arm doesn’t work as well as it used to but I am OK with that.”

Mr Pearson said the Bite Club had 300 members, including witnesses and relations of those attacked.

He can now look back on his attack with the wisdom of his years. He said: “I was in my late forties and by that age, you’ve had lots of significant events in your life – and for me some of them were worse than being attacked by a shark. But I still had questions, I was still suffering the bad dreams.

“I started seeking out other shark attack survivors to see how they had dealt with things and I was surprised to find a lot people had had no contact with others [victims].”

He is now helping a young woman who was beside Tadashi Nakahara, a 41-year-old Japanese surfer, when he was killed by a great white shark in February last year as he sat on his surfboard off Ballina, in northern New South Wales.

“She was looking into his eyes as the shark hit him,” Mr Pearson said. “She can’t get that out of her mind. She can’t surf any more.”

The Bite Club has also helped David Armstrong, a retired teacher whose wife, Christine, was killed by a shark as the couple took their regular morning swim at Tathra, south of Sydney, two years ago. “The only part left was her intestines which I picked up while searching for her body,” Mr Armstrong wrote on Facebook.

Dale Carr was attacked a year ago by a great white shark as he paddled out to the surf at Lighthouse Beach, Port Macquarie, north of Sydney. “I felt a sudden jolt under the board and I saw this big dorsal fin,” he said. “It sort of moved left and disappeared. Then all of a sudden its head came on to my thigh. I struck it a couple of times but that was like hitting a suitcase full of concrete.”

Mr Carr forced a finger into the shark’s eye as blood streamed from his thigh and buttock. “I have never seen anything so big freeze,” he said. “Within a split second there was a white swish of water and the shark was 30ft away.”

The 39-year-old structural engineer struggled 300ft back to the beach where he collapsed from blood loss. The father of two was saved by quick-thinking rescuers.

Going back into the water eight weeks later, however, was traumatic. “That first surf was one of the worst experiences of my life,” he said. “I threw up five times before I went back into the water. Even now I still have periods when I have a very bad feeling.”

The attack revived an old, deep trauma. When he was 20, Mr Carr was in a road accident in which his father died.

“I tried to pull him out of the car and I tried to resuscitate my father. He died,” Mr Carr said.

“What I found was the shark attack dredged up that trauma. I became hyper-vigilant in the way I drove. So shark attacks can sometimes manifest into other parts of your life.” Mr Carr ended up trying many different treatments and potential remedies to try and help him conquer his past traumas. Carr has said he experienced somewhat frequent night terrors, to which he tried experimenting with the likes of cannabis-related products you can find for sale on a website such as https://area52.com/delta-8-products/, as well as the many other online businesses that look to improve the health and wellness of their customers. Carr has slowly been healing his trauma day by day, night by night. That said, although cannabis is one of many different ways in which he might have found relief, he should have also considered opting for neurofeedback treatment— an evidence-based and promising therapy that addresses underlying biochemical changes caused by trauma and PTSD.

“Some people get bitten by a shark and are able to rationalise that as not the worst thing that’s ever happened to them. And others can’t see that it’s going to be OK. We see everything in between in the Bite Club.”

Great white killed after man loses most of leg

A 14ft great white shark was killed yesterday in waters close to where a surfer was mauled on Tuesday. The death, however, has started a row about culling the creatures.

Ben Gerring, 29, is in a critical condition in Royal Perth Hospital after losing most of his leg in the attack at Falcon, south of Perth. Western Australia’s Department of Fisheries set the trap as part of its serious shark threat policy.

The hooked shark could be seen thrashing around on a baited drum line before it died. It was towed out to sea and disposed of after samples and measurements were taken.

No tests were conducted to establish whether it had been responsible for the attack.

Natalie Banks, of the international marine conservation charity Sea Shepherd, said that the policy was similar to going to a park 18 hours after someone there had been bitten by a dog and simply killing a dangerous dog.