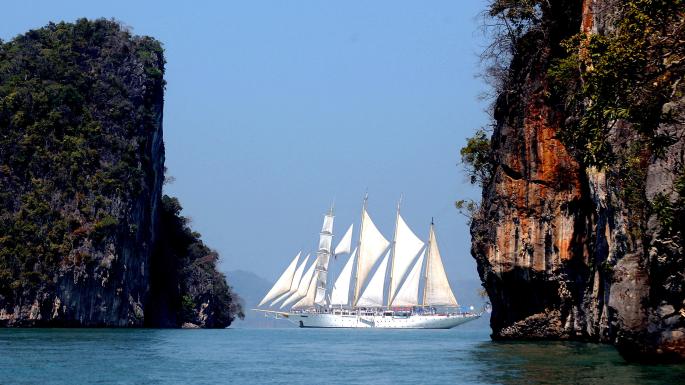 Sergey Tunikov, the captain of Star Clipper, is a dashing silver fox from Russia. He’s also quite the showman — but it must be hard not to be when you’re in charge of a 226ft-tall ship, a genuine square-rigger carrying 244 passengers and crew under 36,000 sq ft of sails. “All sails up! Jibs! Staysails! Square sails out!” he commands, his arms thrown wide. His brawny crew scurry around the deck, a complex mass of ropes and winches.

I’m hopping up and down with excitement as we pull out of Phuket, the lights of Patong beach fading into the distance. But this voyage is special for the crew as well as the passengers: it’s the company’s first in Asia for six years.

Like many other cruise lines, Star Clippers had to pull out of the region when pirates in the Gulf of Aden, between Yemen and Somalia, made the passage from the Mediterranean too dangerous. The security situation has improved, but, even so, the ship — without passengers on board — had to make this year’s voyage east swaddled in razor wire, with sandbags piled around the bridge. “We had four guards with machineguns on permanent watch,” Captain Sergey tells me casually.

Sue in her favourite spot, below the bowsprit

This means that Thailand is back on the menu for swashbuckling wind-powered adventure. Star Clipper’s version of Thailand isn’t about temples and markets — our week is spent exploring the national parks in the waters around Phuket, swimming, snorkelling and lotus-eating by day, hauling anchor against the backdrop of a fiery orange sky and sailing through the night.

Repetitive? Not a chance. The undeveloped, jetty-free islands we visit are, as the locals say, “same-same but different”. We become experts at the “wet landing”, paddling to shore from the ship’s tenders.

At Ko Kradan, I snorkel over wavy red and brown corals and giant sea urchins, fish in psychedelic shades flitting in front of my mask. Monkeys hoot to each other from the coconut palms and fish eagles ride the thermals above the canopy.

From Ko Rok Nok, an intrepid group paddle across the bay in the ship’s kayaks, returning with tales of dragon sightings: prehistoric-looking monitor lizards basking in the sunshine.

In Phang Nga Bay, it’s the ship that becomes the star of the photoshoot, its 16 sails catching the wind as we buzz around it in the tenders, snapping away like paparazzi.

On Ko Similan, we do bump into some other tourists: 500 Chinese rocking up in enormous speedboats to pose for endless selfies. The girls are done up in heels and floaty dresses, a few even slipping into mermaid tails and arranging themselves prettily on the rocks.

We speed across an emerald bay towards Ko Surin for a very different encounter. Surin, tucked up against the Burmese border, is home to a community of reclusive Moken, sea gypsies of Austronesian descent. Peter, our cruise director, has lived with the Moken and, in an excellent lecture, he reveals how, in 2004, they read the natural warnings of the coming tsunami and retreated to higher ground and safety.

On board, life moves at a gentle pace, with knot-tying lessons, talks on seafaring and, on a calm day, a chance to scramble up a ladder to the crow’s nest, partway up one of the four towering masts. My favourite pastime, though, is lying in the big nets strung either side of the bowsprit, where I can gaze up at the sails, or down at the water below, and feel as though I’m flying.

Friendships are soon struck up in the al fresco Tropical Bar, where passengers bond over boozy quiz nights and a hilarious talent show. But you don’t really sail with Star Clippers for enforced entertainment. After dinner most nights, I lie on a lounger on deck, gazing at the starlit sky through the criss-cross of rigging, soothed by the waves and the gentle creak of the masts.

■ The 148-passenger, four-masted sailing yacht Wind Spirit is based in the earthly paradise of the South Pacific, and a seven-night round trip from Tahiti starts at £4,375pp, including flights and one night at Le Meridien Tahiti. You’ll call at six islands in total, including Bora Bora (020 7399 7670, mundycruising.co.uk).

■ For the more budget-conscious, the 49-passenger megayacht Galileo offers several voyages from Athens, including a week-long itinerary that sails on March 31 and calls at Olympia, Delphi and the amphitheatre at Epidaurus. Prices start at £1,104pp, excluding flights; allow an extra £300 for the excursions (020 8324 3117, seafarercruises.com).

■ Or push the boat out in Costa Rica and Panama, and traverse the Panama Canal on Sea Cloud II, a palatial 94-passenger windjammer. An 11-night cruise from Puntarenas to Puerto Limon, departing on March 1, starts at £6,295pp, including flights, all excursions, lectures, crew tips and wine with dinner (020 7752 0000, noble-caledonia.co.uk).